Not all that long ago, it was easy peasy for passers by to see into our kitchen. I say kitchen very loosely of course. Nonetheless, with our driveway built and cleared of the jungle that previously resided there, it was time to get some privacy.

You can see from this picture of Joe and his dad laying the concrete driveway, that anyone from the main road could see straight down to the end of the garden, and if they really wanted, could see me doing the dishes at the kitchen window.

But now, we have a lovely new fence…..and about a trillion leaves. Cheers Autumn!

We were tempted to paint it bright blue just like the front fence but weren’t brave enough.
For anyone interested in the actual colour, here is Joe modelling the paint: Cuprinol in Forest Oak.

Over the past month or so, Joe and his dad have been concreting the driveway. When we moved in, it was mostly overgrown bushes and a small broken fence that introduced a concrete footpath to the front door.

Well, we (read: Joe) have ripped out all the bushes, turned over all the soil, and prepared the area to become a driveway. We have 2 cars so it always made sense that this would become a home for them. Not to mention that when I park on the road, the birds in the huge tree above the house leave me daily presents – open your bowels elsewhere will you!?

With Winter fast approaching, and not wanting to park on muddy soil, Joe and his dad have worked long and hard to get the driveway concreted. They first dug down into the soil to make way for materials – It later emerged that this was too deep, but you live and learn!

They added foundations for the concrete (I think Joe actually used some old golf clubs in there somewhere to reinforce the concrete. Very creative dear!)

Gravel was then added for drainage. This was the original plan for the driveway, but because of the huge tree, it would be near impossible to sweep up Autumn leaves without making a jolly good mess. So, it’s sloped concrete instead. All around the back garden is now about a foot high with soil thanks to the digging down. It’s like we’ve got loads of mini ramps around the side!

Here are the boys evening out the final batch of concrete.

The gates that were given to us (for free woohoo!) have now been added and all the fences are now blue. Here’s a panoramic shot of the front garden!

Starting to look better isn’t it?
…And we also put our hand print in the final lot of concrete with the date, just for giggles.

I didn’t get to take as many sneaky pictures for this project because Joe and his dad did so much before I would get home from work!
It took a lot of patience and time, because every time they wanted to lay some concrete, the skies would open and just heave it down – typical British ‘summer!’ The tree offered some protection and they eventually got it done. They’ve really done a great job.

When we moved in, we were generously given a new fence by Joe’s Aunty and Uncle. The one that was already there was falling apart and along with the overgrown front garden, made the house look abandoned – which it was. But we wanted people to know that it wasn’t a free for all anymore. It’s ours.

Now, people are really going to pay attention because Joe has painted it blue! 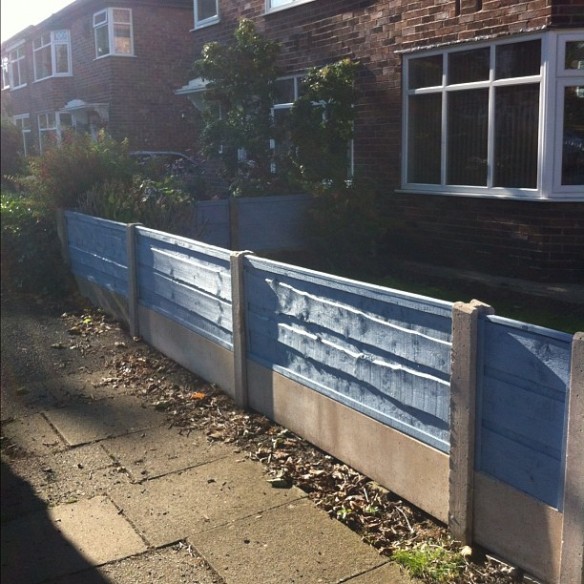 He used Cuprinol Garden Shades paint, and unfortunately from the state of the tin, I don’t know what shade it is! Beaumont Blue rings a bell though…

Joe’s mum says the fence makes her smile as she drives down our road and sees the house. Aww. 🙂

Next we will need a blue front door to match. Can’t wait!

Two weeks ago (yes, I’m slow at blogging stuff these days) Joe and I had a lovely weekend with family. I don’t get to see my mum and step-dad that often since they moved away, but we wanted to get together and discuss wedding stuff so it was a great excuse to see each other.

However, it was also pretty handy because the shed that Joe and his dad were prepping the garden for the weekend before, needed 3 men to put it up because it’s so large and heavy.

With my step-dad up for the job, he, Joe and Joe’s dad, Peter, cracked on with putting it together. Me, my mum and my sister talked weddings indoors. Doing wonders for the gender stereotype…

According to Joe (because I know nothing of sheds) wood panels outside need a special coat to avoid rotting, and then we can fill it up with outdoorsy stuff. I think Joe wants to show off his wonderful job to his friends, so here are the pictures I sneakily took while they were working away.

A very proud Joe. Although from his expression, you’d think he was in a huff! I think he was just tired. Good job Joey. 🙂

Joe is adament that one day we will have the most spectular garden of all time. Unfortunately, a British summer usually means rain and more rain, so he’s hardly had chance to do garden work since we moved in. However, he’s now accumulated enough tools to require a shed. We went shopping for sheds at the beginning of the ‘summer’ but, we’re easily distracted and Joe ended up locking me in a children’s tree house before we went home for ice cream. 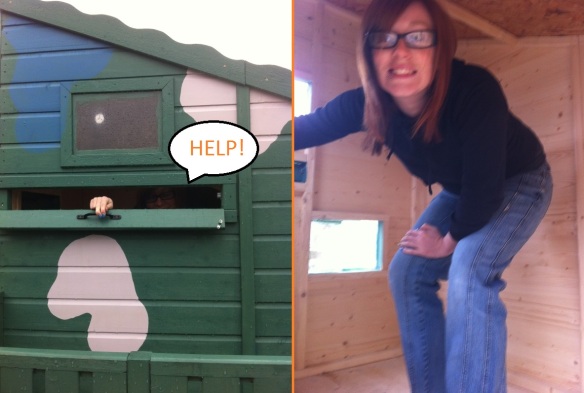 But, Joe’s parents have come to our rescue once more. Carol, Joe’s mum, works at a college and they were getting rid of a really massive shed. So, we’re taking it off their hands.

I came home from work on Friday to see it at the side of our house. Just look at that glorious summer weather…

We were really lucky that on Saturday it didn’t rain, considering it was supposed to be a month’s worth in one day. So, Joe and his dad, Peter, cracked on preparing the back of the garden, which is a big job. As Joe said:
“It’s like Jumanji back here!”

They found a fence we didn’t even know was there and it looks like our garden is actually a bit longer than we thought! Good news considering now it won’t take any space from our garden.

After the bushes were cleared and trees were trimmed, Joe and his dad used some of the turf from the back to try and repair some patches we’ve got on the lawn. Most of this is self-inflicted through numerous bonfires. Oops. 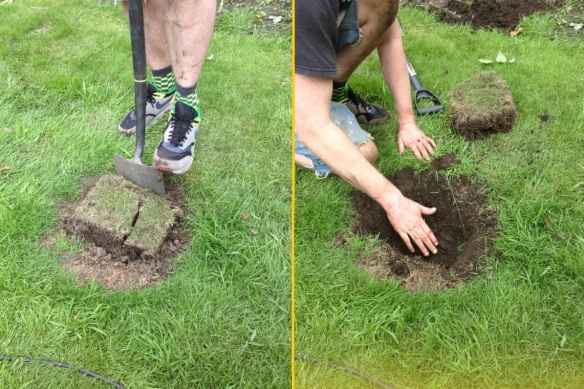 The rest went into a big pile that we’ll have to take to the skip at some point.

They’ve done a smashing job and now we have a space ready for the shed!

And, the only thing we liked in the garden was in that corner. A lovely huge bush that blooms with bright blue and purple flowers. Don’t ask me what it is, I’ve no idea!
So, Peter kindly trimmed it and moved it to the front garden instead. It’s looking a little sorry for itself lately since we’ve had no sun, but I’m sure by next year, it’ll look top banana.

I wish I could say I had more input to the project but I’m just pants at garden things. I spent most of the day doing laundry and wedding stuff. But, I did catch a frog. Does that count?

The next job for the boys is putting down some sort of base for the shed and then waiting for another dry day to get it put together again.

I mentioned in a post back in April that we appear to have hedgehogs in the back garden! I never got around to uploading the pictures but have just backed up my iPhone so I imagine plenty of image-heavy posts coming up…

These were taken on 2 separate occasions, and sorry the pictures are bad. We were using our phones as a light to look at them, and just happened to get some shots in the process.

I haven’t seen them in a while. Does anyone know if they will return? I don’t know anything about them but I think they’re so cute!

Also, we got this figure from Joe’s Aunty and Uncle as an engagement pressie, and it just so happens to have hedgehogs on it! Thanks so much Debbie and Alan 🙂

I’m going to find a lovely little place in the garden for it…as soon as the rain stops.

The sun may keep disappearing behind cloudy skies (the buggar) but that hasn’t stopped Joe taking an interest in our garden.

For a long time now, Joe has been itching to get his hands on some garden tools and get stuck in. It’s a big job but it’s something that he really missed when he left his parent’s house and moved into a flat with little old me. Well, he’s got his wish. We finally have a garden and slowly but surely he’s gathered some tools.

Last weekend, we added to this and bought a lawn mower. With a 50-ish foot garden, it was about time really. As the garden was untouched for almost a year before we moved in, it’s pretty wild out there with weeds, mushrooms, moss, and all that wonderful stuff that you just don’t want in a lawn. But it gives Joe a project for when I want to watch terrible embarrassing TV, so I’m all for it.

(For some reason, he loves to strut his stuff in a really camp way when he does the lawn. I have no answer for why this is)

We’ve got a few plans for the garden so far in our heads. We know we want a lovely wooden shed at the back right corner, and we know where we want a table area that catches the most sun, but for now, it’s really a case of killing what we don’t want, and trying to even out and grow some nice grass. We’re hosting a big family BBQ this summer for my sister’s birthday so Joe is hoping to get it in a reasonable state before then.

We are going to try and get a design idea sketched out soon so we can get a better idea of what to buy and when – so far we have discussed that we want a pool, water feature, shed, trampoline, tree house and zoo. I fear these may be unrealistic…

Amongst the weeds and general ugly shrubbery, we have had some nice surprises so far. One is the flowers. They pop up in all the wrong places (where we want to park the car – typical!) but they’re really pretty so I may move them as soon as I learn anything about gardening.

We’ve also, got HEDGEHOGS! I haven’t seen them yet but Joe snagged a picture this week when I was out (I’ll post this at a later date). I know they’re in decline in the UK so I wonder if there’s anything we can leave out for them? I need to do some research. Send me some info if you know much about it! I hope we see them again.

Error: Twitter did not respond. Please wait a few minutes and refresh this page.

Well i guess this is growing up
Blog at WordPress.com.